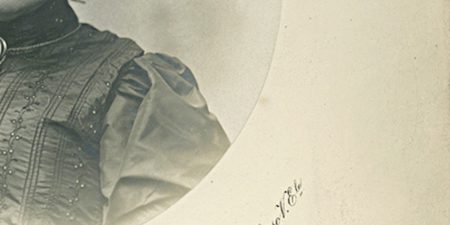 The Museum will virtually bring to your homes a selection of photographs coming from our archive. Every week you will discover new images.

Eusapia Palladino was born in Minervino Murge (Puglia, south-east of Italy) in 1854; when she was one year old as she often recollected, she was hit on the head with a casserole dish by her stepmother: from that scar, covered by a white lock of hair, she will eventually hear a cold air blowing out during her “trance” moments.

She became famous all over Europe and deceived many scientists (Pierre e Marie Curie, Camille Flammarion, Giovanni Schiaparelli), among them Cesare Lombroso who in 1981 would examine her on two occasions. The results surprised him:” Out of the seance (context), she is a normal woman, a vulgar type, without any feature that could make her different from millions of organisms similar to her”.

In an attempt of scientifically explaining the phenomenon of mediumship, Lombroso would hypothesize that there are manifestations of an unspecific “radiant energy”, “double” the medium, of substances held in the “fourth dimension”. The last years of the scientist’s life coincide with his increasing interest in spiritualism: the night before his death, on October 1909, he would correct the preface of Ricerche sullo spiritismo (Researches on spiritualism) his ultimate work.